Our 2019/20 Schedule is on the left side of the page. Just below the schedule you’ll find “Local Okanagan Resources”.

If you are new to weaving or unfamiliar with some terms, the sites Weave Structures and Plain Weave Variations will help. I like this article on Mixing Twills for its practical learning. You’ll find lots more reference material under Lynn’s Virtual Library on the left side of the page.

Posts are published by calendar date of the event so look for them by visiting the Archives to the right or Older Posts at the end of each post.
To return to our Home page at any time, just CLICK HERE. Enjoy and thank you for visiting!

Hilary submitted a couple more great shots of the Spin In in Linden Gardens in the summer. 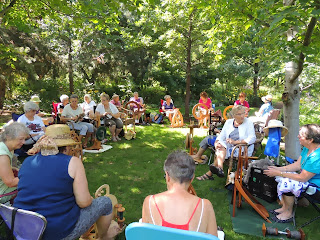 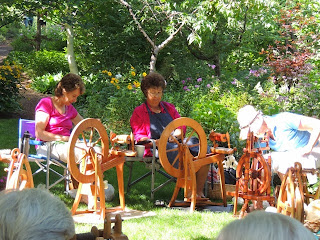 Margie adds:
A couple of weeks ago our guild drop in was bustling with activity.  Klaudia was teaching a felted slipper workshop, Dianne was teaching gals how to make fingerless gloves with bell bottoms and beads, and some were learning to weave.
Quite a few of our gals went to the Ponderosa Spin in the first part of Oct.  Another great day!  I was most impressed with the blankets the Salmon Arm guild did.  They wove several blankets on their warped loom then did a process called waulking to full them.  I came home researched  this process on my internet and was most intrigued with it. It  is a step in woolen clothmaking which involves the cleansing and thickening of the yardage.  In Scottish celtic tradition this process was accomplished by waulking songs which women sang to help set the pace.  Women would weave a yardage about 70 yards long, sew it into a circle and then place it on a long table and begin a very rythematic exercise of fulling the wool.  Apparently in Roman times fulling was conducted by slaves working the cloth by standing knee deep in tubs of human urine.  Urine was so important to the waulking business that it was taxed.  Stale urine, known as wash, was a source of ammonia salts & assisted in cleansing and whitening the cloth.  There are video's on-line as well.

Posted by Desert Sage Member at 11:09 No comments:

Our meetings are held in the Community Hall at the Oliver Community Centre (6359 Park Dr) starting at 10am unless otherwise noted in the Schedule below. Email dssandwg@gmail.com for more details.

A comprehensive list of sites arranged so that you can easily zoom in on a specialty, find a supplier or expand your knowledge collected by Guild members 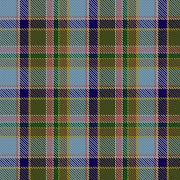 Hard to believe it's over and we had the most fabulous five days imaginable with India Flint. Eco dyeing, botanical gatherings, hand sti...

Our Felted Banner, a 2003 Guild Project along with the Yurt. 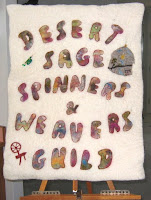 Guild members may list their items for sale or equipment and supplies they are looking to buy. Email enquiries to dssandwg@gmail.com